Rowing is an intrinsic part of University life at Cambridge, and Lucy Cavendish is no exception. Every year, keen-to-row Freshers sign up, and before they know it, we’re putting them through their paces, getti

ng ready for all the exciting Michaelmas Term races, which include the fancy dress Emma Sprints and the indoor sprinting of Queens’ Ergs. Whereas, in other undergraduate colleges, crews are likely to remain set with people staying for several years, we experience a high turnover of rowers each year. We really pride ourselves on the effort we invest in our novices in those first few crucial weeks so that they too may possibly have the opportunity to row in the First Boat come Lent Term. We want to make sure that the Lucy ladies have the fullest Cambridge experience; what better way than to join the University Rowing Community!

With the numerous successes at the Olympics and Commonwealth Games for our national squads over the past decade, rowing has become a sport not just for the elite of the public schools but for everyone.  Women’s rowing especially is coming more to the foreground of the public media, with the Oxbridge Women’s University Boat Race moving fro 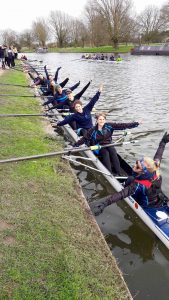 m Henley to the Thames. In 2015, they will be racing the same course as the Men’s crews, giving the event greater prominence in the Sporting Calendar. Katherine Grainger, one of the most prominent female rowers in the UK, didn’t win her Olympic Gold medal till she was 37 and only started rowing at university. There has never been a better time to strap your feet into the foot-plate and get your hands on that blade – so come and join the Lucy Cavendish Boat Club!

The Rowing year is incredibly condensed as it only falls in the weeks of Full Term, allowing for only 8 weeks of training, as well as competing. In Michaelmas, the first competition falls in Week Four giving the Club only 28 days to teach the novices the rowing technique, as well as the all-important ‘rowing together’. With such little time, training is very intense with the novice W1 having 3 outings a week, with 2 erg sessions, and W2 having 2 outings a week, with 1 erg session. We are also fortunate to be able to put out a weekend boat for those whose courses do not allow them to train during the week, or those who don’t want to row competitively. Alongside the new rowers, there is also a Senior squad of returning students who also have an outing 3 times a week, and 2 erg sessions. This is open to anyone with rowing experience to join. At the start of Lent term, crews are selected and the novices become seniors, and can compete for a place in W1. Of course, these are only the expected sessions; most rowers will do extra fitness work, such as core strengthening or weight training. We are fortunate at Lucy to have our own gym which is free for students to use and comes equipped with 2 rowing machines, weights and other equipment for the rowers to use in their free time.

We are very grateful to our very generous benefactors, who have made our successes possible: Dame Veronica Sutherland, former Lucy Cavendish President, and Dr Lindsay Traub, former Vice-President. Their donations of both Lady Charlotte (our novice boat) and Speedwell (our first boat) make up the Lucy ‘fleet’ and we are proud to have such dedicated supporters.

Of course, it’s not all early icy mornings and exhausting ergs: we also organize fortnightly pub meets and swaps with other college boat clubs, where we can all share the joys and frustrations of rowing. The highlight of each term is the Boat Club Dinner, held at Lucy in Michaelmas Term and Hughes Hall in Lent. Although training is important, the social aspect is even more so, as it gives you an opportunity to get to know the people in your crew and in the boat club. When we row, we are working not just for ourselves but for each other. A crew can achieve so much more when they work together as a unit.